Hansjörg Schellenberger was born in Munich in 1948 and grew up in Saal an der Donau, near Regensburg, where he completed his secondary education in 1967. He first came into contact with music at the age of six, when he began learning the recorder. He started taking oboe lessons at the age of 13 and entered Munich’s Musikhochschule in 1967, where he studied with Manfred Clement. He also pursued studies in informatics at the Technical University of Munich. Schellenberger is a co-founder of the „Musik unserer Zeit“ series in Munich, through which he acquired a rich groundwork of knowledge and experience in contemporary music, a field he is still actively engaged in to this day. After passing his exams in 1970, be became deputy solo oboist at the Cologne Radio Symphony Orchestra in September 1971 and solo oboist there in 1975. He began working as a regular substitute at the Berlin Philharmonic Orchestra under Herbert von Karajan in September 1977, and was appointed solo oboist there in September 1980.

Among the awards Schellenberger has won are the first prize in the Competition of German Music Conservatories (1971), the second prize in the International ARD Competition in Munich (1972) and the Cultural Promotion Prize of Bavaria (1972). Between 1981 and 1991, he pursued an active teaching career at Berlin’s Hochschule der Künste, and he has been increasingly committed to his career as a chamber musician and soloist. Besides being the founder and director of the Haydn Ensemble Berlin, he is a member of the Wind Ensemble of the Berlin Philharmonic and of the Ensemble Wien-Berlin. He has also been a longtime duo partner of the pianist Rolf Koenen, the flutist Wolfgang Schulz and the harpist Margit-Anna Süss.

Schellenberger has performed as a soloist with many different orchestras and conductors, including Claudio Abbado, Carlo Maria Giulini, Riccardo Muti and James Levine. He has been giving master classes regularly at the Accademia Chigiana in Siena since 1989 and at the Scuola di Musica in Fiesole since 1986. The artist has recorded for Denon, Deutsche Grammophon, Orfeo, Sony Classical, etc. 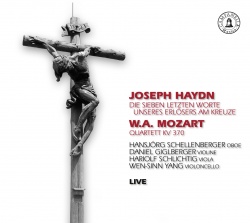